DOMELAND View over the Golden Horn and Beyoglu from the Ottoman-era Süleymaniye Mosque. Istanbul’s famed skyline has seen several new arrivals in the last year alone.

This article was published in Wall Street Journal on March 4th 2022:

A flurry of new and refreshingly modern hotels, restaurants and art spaces are shaking up the city’s oldest quarters. But is it enough to lure back spooked tourists?

In July, Fatih Tutak—a chef who has worked at some of the world’s top restaurants, including Noma in Copenhagen and Nihonryori in Tokyo—reopened his buzzy modernist restaurant Turk in the trendy Bomonti neighborhood (it debuted just before the pandemic). In August, a Mandarin Oriental opened on the Bosphorus, the epic waterway that divides the city’s European and Asian sides. On the opposite shore a power plant in the Kadıköy district has been converted into an arts complex called Müze Gazhane, or Gasworks Museum, which bundles an array of museums (one dedicated to climate, another to comics), performance spaces and art exhibits. In September, in Galata, one of the oldest parts of the city, the École St. Pierre hotel arrived on the scene as a stylish conversion of a 180-year-old French school that includes some 13th-century city walls.

Cornerstones are changing in a city whose “New Mosque” is 357 years old. In Taksim Square, the grand plaza that has long been the heart of the modern city, the Atatürk Culture Center, which includes an opera house and art galleries, opened in October, the same month that an international contemporary art fair debuted at Tersane, a new venue that has revived the historic Haliç Shipyard in the Golden Horn district. And the megaproject Galataport, an underground cruise ship terminal, which also launched in October, now anchors a part of the city that had been derelict and inaccessible since the late 19th century. Indeed there is now a truly new mosque, Grand Çamlıca, completed in 2019 as one of the largest in Turkey. 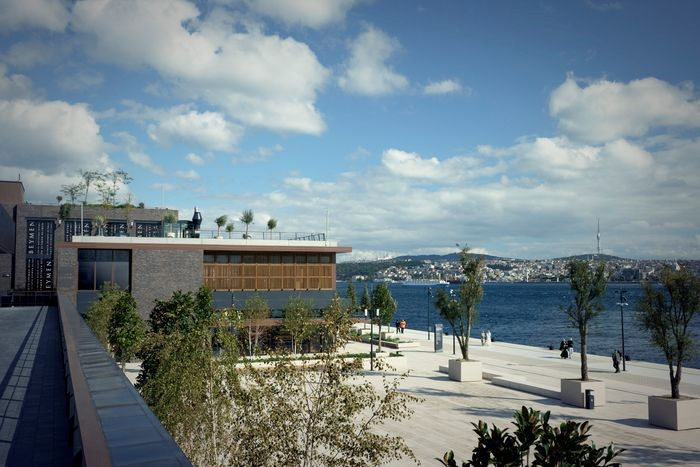 Galataport, a new waterfront project built along the Bosphorus, encompasses a new cruise terminal and a handful of restaurants. The Peninsula hotel is slated to open in the complex later this year.

The city has had its so-called “Istancool” moments in years past—a Newsweek cover story in 2005 called it “Europe’s hippest city”—but this new moment, like so much of pandemic life, seems largely about reinvention.

Even centuries-old tourist draws have new life. The Blue Mosque is wrapping up a major renovation. As of last July, visitors can take rooftop tours of the Grand Bazaar. The 5th-century Theodosius Cistern now hosts an hourly state-of-the-art light show. There’s an elegant new restaurant atop the 18th-century Cağaloğlu Hamam, while previously off-limits parts of the Ottoman sultan’s sweeping spread, Topkapi Palace, have been restored and opened to the public. “Old, dusty things have a new shine or sheen to them,” said Esin Kara, who has been running her citywide tours for 22 years. “It gives the tours and the experience a new energy.” 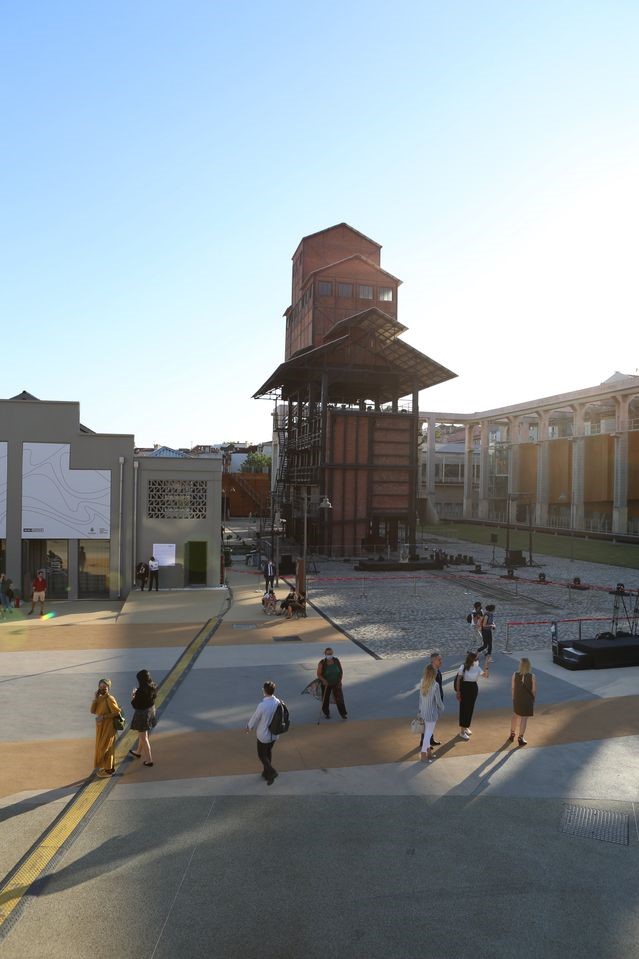 Istanbul has used the pandemic’s pause to reframe its travel identity. “Turkey is trying to position itself more as a luxury destination,” said Maria Alvarez, department head of Tourism Administration at the city’s Boğaziçi University. She added that Turkey’s economic crisis—its lira is in freefall as one of the world’s worst-performing currencies of 2021—puts luxury within reach of those with relatively modest budgets. “Istanbul took great advantage of the Covid break. All construction and renovation accelerated and now they’ve all opened at the same time,” said Sinan Sökmen, a second-generation tour guide who owns Istanbul Tour Studio.

And the moment isn’t over. The Çırağan Palace Kempinski hotel, a favorite of celebrities, is undergoing an extensive renovation. Ditto the Four Seasons at Sultanahmet. A Peninsula hotel is slated to open this year, along with a new building designed by Renzo Piano to house the Istanbul Modern art museum.

If the jumble is jarring, it’s because Istanbul has 39 districts—15 million people have to live somewhere—and there’s something new or renovated in almost all of them, said Bettany Hughes, the British author of “Istanbul: A Tale of Three Cities,” who has been going to Istanbul annually since 1986. She noted that Asian neighborhoods—especially Kadıköy and Moda—have new hipness. Though Istanbul’s fresh lure is not a revived neighborhood but a revived city. “If the Earth were a single state, Istanbul would be its capital,” said Napoleon Bonaparte, whose eastward conquest was thwarted by Turks. Now a 21st-century boost has rekindled the French emperor’s sentiment, as Turkish Airlines has expanded routes with Ottoman-era zeal after Istanbul debuted a splashy new airport in 2018. It now flies to 281 international destinations in 128 countries, a roster it bills as “the most countries in the world.” 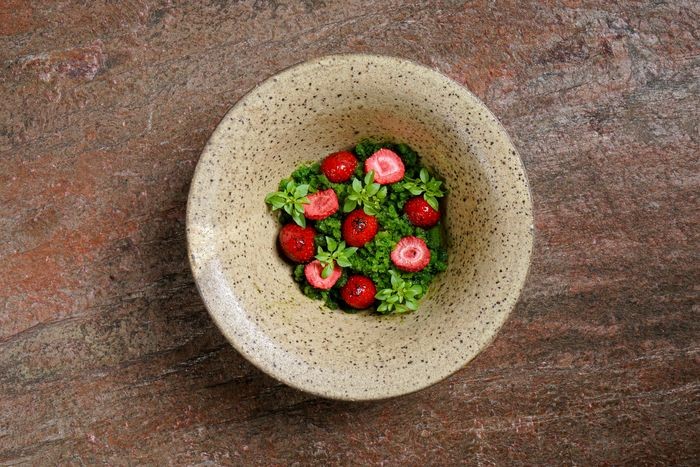 A strawberry, basil and yogurt dish at Turk, which takes a distinctly modern approach to traditional Turkish dishes.

Political strife in recent years—including an attempted coup in 2016, a terrorist attack in 2017 and the widely publicized murder of a journalist in 2018—spooked foreign visitors, but tourism officials are counting on the rush of new development to build excitement ahead of the nation’s centennial in 2023. Though Ms. Alvarez said the country’s tourism industry now fears a spillover effect from the recent Russian invasion of Ukraine, as travelers may be hesitant to travel to Eastern Europe while the conflict is ongoing.

Even so, many locals are optimistic. Among them, Mehmet Gürs, one of the city’s most prominent chefs: “It’s been a tough few years for the city, but now it’s back.” 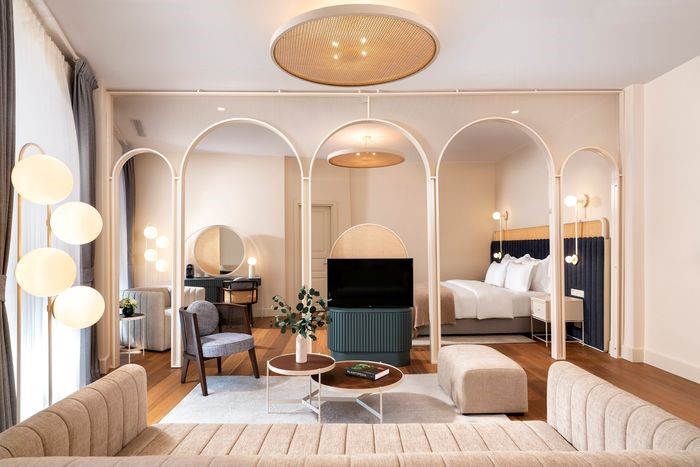 The Galata suite at the École St. Pierre hotel, which opened in September in one of the oldest parts of the city.

THE LOWDOWN / A Few of Historic Istanbul’s Newest Delights

Check with the U.S. State Department at travel.state.gov for the latest on Covid entry requirements and other health and safety recommendations.

École St. Pierre hotel’s restaurant sports rare 13th-century city walls, and its graceful Galata suite (pictured above) offers romantic, private terrace views of Galata Tower, the 14th-century tower (itself recently renovated) that has become one of the most-iconic buildings in Istanbul. From about $310 a night

The silver lining of Turkey’s weak economy means bonkers bargains for tourists. A favorite of celebrities and athletes is tiny Cashmere House in the Grand Bazaar, which recently pivoted to fashion-forward men’s and women’s caftans.

Since 1977, the MEP family has been on the mission to promote tourism in the country and familiarize nationals and foreigners to the unexplored part of our beautiful country. We are fully aware that the disadvantageous part of western turkey can benefit in every way possible via tourism. So, we are making the visits to Turkey’s Stone Hills, Göbeklitepe, and several similar destinations on the eastern side really fun and contended!

MEP Destination Business Solutions specializes in incentive travel, conferences, and meetings. If you have any of such corporate needs, especially if you want to reward employees with incentive traveling or looking for a solution for MICE (meetings, incentives, conferences, events) travel, and want something new and special in terms of destination, our DMC has got you covered!

Exploring these super unexplored ancient sites can be an experience of a lifetime. We can customize trips to the site as per your requirements to cater to your needs the way you expect. Or we can plan everything for you. For example: an overnight incentive trip to Istanbul, and from there, a trip to this place with a short flight for one day or one night and two days. Feel free to reach us out for consultations and booking.