On the first morning of IMEX Frankfurt we had the priviledge of attending a session on global trends in incentive travel, organized by SITE Global’s leadership team. It was very useful to have this always important topic approached from a regional angle. For our friends who don’t know SITE, it is the leading association on incentive travel. The research SITE Foundation commissions and publishes is recognized globally.

Mergers & acquisitions in the industry was a concern discussed by all regions. Whether it be among hotel groups or 3rd party planners, these M&As are having a profound impact. While in Asia this means an opportunity, as Selina Chavry (MD of Pacific World Global DMCs) mentioned, for others it meant a worry about the value of personal relationships, as Daryl Keywood (from Walthers DMC Southern Africa) mentioned.

Technology was another prominent topic. Selina, as we all predicted, explained that Asian clients expect to be engaged by technology throughout the event. Merina Begg, MD of ATP Argentina DMC, revealed that South America has one of the highest social media penetrations in the world, so that has an impact on how incentives are planned.

Some other topics were strickly regional, GDPR (the new EU law on data protection coming into affect on May 25th) is of major concern in Europe said Padraic Gillian of Sool Nua. Decreased commissions are the hot topic in North America as Rhea Stagner, VP Maritz Global Events, mentioned. She also mentioned that she doesn’t expect hotel groups who’ve introduced lower commissions in North America (Marriott, Hilton and IHG) would extend this to other parts of the world.

Most common message throughout the presentations is the value of “experiences”, something that we see at MEP Destination Business Solutions as well. Guests no longer want to be tourists, they want to be individual participants of an experiental incentive trip.

Written by Eda Özden, SITE Global Board of Director. 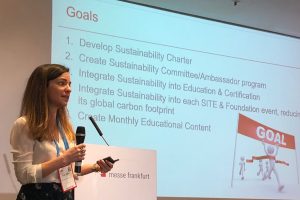 For More - Get in Touch with us!
Did you find apk for android? You can find new Free Android Games and apps.
No tags.
NextPrevious
Copyright 2020 Meptur | All Rights Reserved